You are here: Home » Injuries » Paralysis 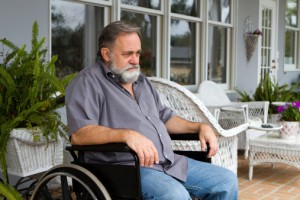 Paralysis is the loss of the function of a muscle or, more commonly, a group of muscles. Along with the inability to move the muscles, a patient may also lose feeling in the affected area. The loss of bodily functions frequently accompanies paralysis.

The spinal cord runs from the brain down the center of the back and is composed of nerves that transmit messages to and from the brain. Collectively known as the central nervous system, it is what allows people to walk, pick things up, feel things and basically do everything people do on a daily basis. When the spinal cord or the nerves running from the spinal cord are damaged, injured people can lose those abilities. When the damage is severe enough, it leads to paralysis.

Paralysis is categorized in one of four categories depending on the type and severity of the paralysis:

4 Most Common Causes of Paralysis

Although anything that injures the central nervous system can cause paralysis, the four most common causes of paralysis are:

1. Spinal cord injury — An injury to the neck or back can damage the spinal cord, resulting in paralysis. As a general rule, the higher up the spine is injured, the more serious the paralysis may be. A broken neck, for instance, can cause quadriplegia, whereas an injury to the lower part of the spine is more likely to cause paraplegia.

The most common causes of spinal cord injuries are:

3. Stroke – A stroke is caused by an interruption of the blood supply to the brain. The brain requires oxygen and nutrients to function properly. Blood flow may be reduced because of a narrowing or blockage in the arteries. A blood clot, for example, that makes its way up toward the brain and then becomes lodged in the artery and blocks the blood flow can cause a stroke.

Treatment Options for Victims of Paralysis

Despite monumental advances in the areas of science and medicine over the last century, there remains no cure for permanent paralysis. Immediate medical treatment when a stroke, TBI or spinal cord injury is suspected is critical to try to prevent further damage. If, however, the damage has already led to paralysis, it cannot be completely cured.

There are, however, treatments that can help paralysis victims regain some movement and function as well as to enjoy a better quality of life. They include:

Kevin Krist has recovered millions of dollars in compensation for serious personal injury accident victims in Texas. If you think you or a loved one has a spinal cord injury claim, contact Kevin Krist today to talk about your case. Simply call 281-677-3960, or use the firm’s online form. Let Kevin Krist explain how he can put his personal, proven experience to work for you and your family.