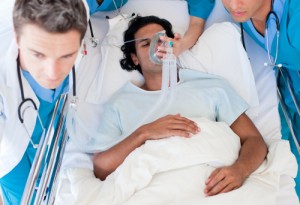 Emergency rooms are often busy, hectic, overcrowded and stressful environments. Doctors and nurses have to make life and death decisions on a regular basis.

This, however, does not excuse them from providing proper care to each and every patient who seeks treatment in the ER. Failing to provide the required level of care could form the basis of a medical malpractice lawsuit.

While there are numerous ways in which an ER error can occur, the following are some common scenarios:

How Common Are Emergency Room Errors?

A report released by The Commonwealth Fund indicates that a third of all Americans report that either they or a close family member have been the victim of a medical error at some point in their lives. Experts estimate that over 100,000 people are injured or killed each year because of a medical error committed by a health care professional.

Many of these errors are committed in hospital emergency rooms. The Wall Street Journal reported that emergency rooms are one of the top departments named as defendants in medical malpractice lawsuits.

The same report concluded that almost half of all hospital ER errors are the result of misdiagnosis. The yearly cost of those emergency room errors is estimated to be over $1 billion, according to the report

Compensation for the Victims of Emergency Room Errors

When a patient visits an emergency room, the expectation is that they will receive treatment that meets the accepted standard of care. When this does not happen, patients can incur additional expenses that would not have been incurred had the emergency room visit not resulted in a medical error

Medical treatments, hospitalizations or surgeries could be required to correct the damage done by an ER error. Victims could be entitled to compensation for those costs under Texas law. This type of compensation is referred to as “economic damages.”

A victim will likely suffer emotional trauma as a result of an ER error. Texas law also provides compensation for the pain and suffering an emergency room error causes as part of the non-economic damage awarded a victim in a successful medical error lawsuit.

It is important to note that Texas law caps the amount of damages a victim can receive in many medical malpractice lawsuits. The applicable cap depends on various factors, such as the type of injury, the number and type of defendants in the lawsuit, and when the error occurred.

If you believe that an emergency room error caused you to suffer injuries or caused the loss of a loved one, you could be entitled to compensation. Although the law provides a mechanism to compensate victims of medical malpractice, the law also limits the amount of time within which a victim can file a lawsuit for those injuries.

Contact an experienced Texas medical malpractice lawyer as soon as you suspect that an ER error caused an injury. The Law Office of Kevin Krist assists ER error victims from Houston and throughout Southeast Texas. Contact us today for a free, confidential consultation by calling 281-677-3962 or by using our online contact form.